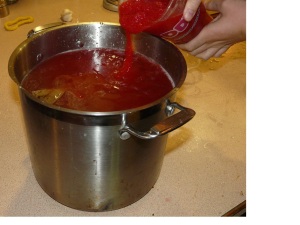 We boiled all ingredients except the coolattas to dissolve the salt and extract the flavor of the bay leaves and cinnamon sticks. We placed the turkey in a large container and poured the brine over it. We covered the container to keep the turkey in the brine and prevent spilling while we transferred it to the refrigerator. 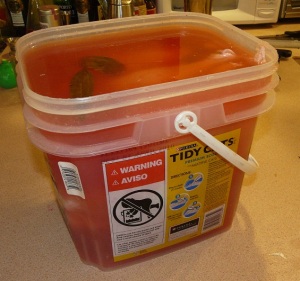 We noticed that our container (hey, it’s not like it had used kitty litter in it, but it does add a certain amount of unwholesomeness, doesn’t it?) had a helpful illustration. Be advised: this container is not fit for brining babies. 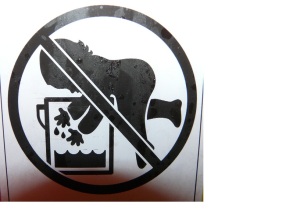 To prepare the stuffing, we purchased a 50-piece box of assorted munchkins, which weighed about 1.5 lbs.

We cut them in half and toasted them at 450° for 10 minutes. We chopped one large red onion and sauteed it in 4 tbs of butter. Then we combined the sauteed onion with two tablespoons of dried sage and one cup of vegetable broth and mixed well.

The next step is to stuff the turkey. When we took the turkey out of the brine, we admired its fluorescent pink color.

We stuffed the turkey, placed pads of bacon under the wings and trussed it. We rubbed the surface with sea salt and placed it in the oven breast side down at 325° for 2.5 hours. We basted it with butter twice.

We then flipped the turkey to place it breast side up and roast it for an additional 90 minutes. During this phase of roasting, we basted it once with butter.

Once the turkey reached 160°F, we made the glaze for it. It was based on a loose interpretation of the recipe for a honey glaze in Joy of Cooking: 75th Anniversary Edition – 2006

and the ingredients list for the Dunkin’ Donuts glazed donut. We mixed 1 lb confectioner’s sugar, 1/3 cup corn syrup, 1/4 cup water, 1/4 tsp agar and a squirt of lemon juice. We brought the mixture to a simmer to create a syrup. Twenty minutes before the turkey came out of the oven (165° internal temperature), we gave the turkey a light basting with the syrup so that it would caramelize (we used 1/4 of the syrup for this step). Once the turkey reached 175°, we took it out of the oven and poured syrup over every side. The glaze coated it very nicely! We then applied sprinkles.

Coffee Gravy
Not everything we do here at Unwholesome Foods is successful at first attempt, so for the sake of full disclosure and to warn others who might be interested in making coffee-flavored gravy, we will tell you what not to do.

For our coffee gravy attempt, we collected and strained the drippings from the turkey. We added two cups of vegetable broth and simmered it with 1/4 cup of whole coffee beans. After failing to achieve a coffee flavor after 15 minutes, we added 1/4 cup cracked coffee beans. Fifteen minutes of further simmering didn’t produce results, so we added two shots of espresso. That too failed to add a coffee flavor to the gravy, so we used 2 tsp finely ground coffee. The taste went from “gravy” to “burnt coffee”. Maybe it was just too hot and so the powdered coffee immediately burned.

Mash Browns
What turkey dinner is complete without mashed potatoes? Or, in this case, mashed hash browns! We mashed them with a potato masher, which is a technique that preserves all the hash brown flavor.

Here we poured gravy on them for decorative purposes only.

Reviews
Beth: The turDunkin’ was largely delicious. It was a bit too salty. I think our kosher salt to normal salt conversion for the brine was off. The coolatta only penetrated the outer reaches of the white meat, but it was delicious and subtle in those places.  The gravy was wrong (adds Alex: on every level). We should not have tried to boil beans in the gravy. We should have used coffee instead of vegetable stock. It had a good consistency, though.  I am proud of my gravy consistency.  The mashed browns were pretty good.  Basic and potatoey.  Anyway, I was very happy with the turkey, the glaze and sprinkles, and the stuffing. But then, I have always been a fan of combining sweet and savory things. I like chocolate on my pretzels and popcorn on my ice cream 🙂

Kristen: The coolatta flavor didn’t penetrate the meat, but the turkey was deliciously moist.

Alex: While the first several bites were delicious, I quickly descended into a hell for the gluttonous that would be beyond the imaginings of pedestrians like Dante. That having been said I had several servings.

Random Commentary
Dave: Instead of honey glaze, next time we should use jelly squeezed from jelly donuts. Then you’ll have just a mound of squeezed jelly donuts.

Alex: They could be baked into a casserole.