Posted on November 12, 2017 by unwholesomefoods

We’re no antifa super soldiers, and we slept through November 4th, but we still wanted to make a bombe. A dessert bombe, that is.

Baked Alaska is an ice cream cake coated in a meringue shell and can often be seen taping itself with a selfie stick while wearing douchy sunglasses.

Basic Baked Alaska is vanilla, but his enlightening videos have taught us that mace and milk are a winning combination. Of course, to make this Baked Alaska, we needed a lot of mace because Baked Alaska certainly deserves it. We used an entire jar!

(Yes, mace is not just a spray, but also a hard-to-find spice 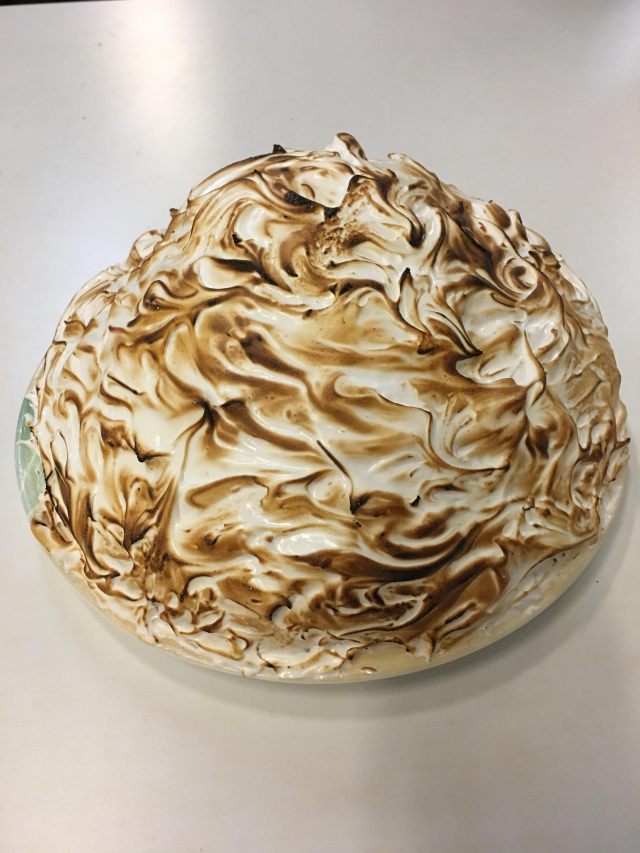 How we made it

Our ice cream was a custard base with proportions based on a black currant and tea ice cream recipe. We infused the heavy cream with mace using tea bags and added lemon and orange extracts for that special Citronella

aroma reminiscent of a moonlit night of tiki torches and white male mediocrity. The lemon extract had a subtle flavor. The orange extract tasted like someone tore out the beating heart of a Cointreau. But together these extracts balanced the clove-like flavors of the mace.

We used a standard recipe for Genoise cake with one alteration: in lieu of syrup or burnt butter, we melted around 4 tbs of butter with 1 tsp ground mace and 1 tsp lemon flavor and folded the mixture into the batter before baking it. Unfortunately, the cake went flat while cooling in the refrigerator before we topped it with ice cream. Don’t worry, we didn’t throw it in the bin, because at least this Baked Alaska isn’t complete rubbish. 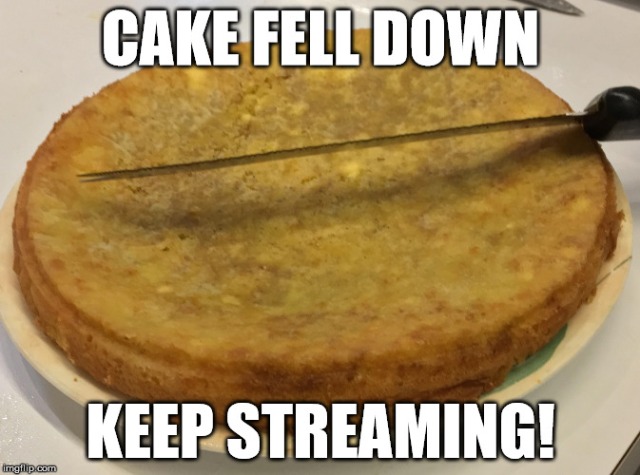 Finally, our Baked Alaska was topped with an Italian meringue that was torched to perfection. 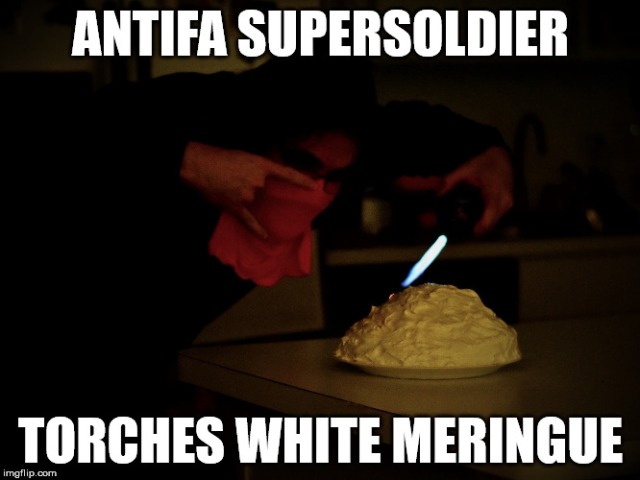 Down with egg white supremacy!

Kristen: The cake was too dense to eat, especially once it was chilled by the ice cream. We probably shouldn’t have tried to use the meringue to shape the overall structure into a high dome, because we ended up with way too much meringue in each slice, like having too much frosting and not enough cake or too many people with the same background and not enough diversity. But the ice cream was delicious! It wasn’t quite pumpkin spice ice cream (“pumpkin spice cream”?), but it had that “autumn is here, weather is turning cold, be sure to wear a coat to the counterprotest against the Nazis this Saturday” taste.

Beth: The mace itself worked very well with the baked Alaska, and it’s something we recommend repeating. We found that the proportion of meringue was too large, and inside it was underdone. That is to say, the white contribution to the flavor discourse was overwhelming as well as half baked. The experience would also have been improved if the genoise (always at the bottom of the dessert hierarchy) had been given more opportunity to rise up.