Posted on October 7, 2011 by unwholesomefoods 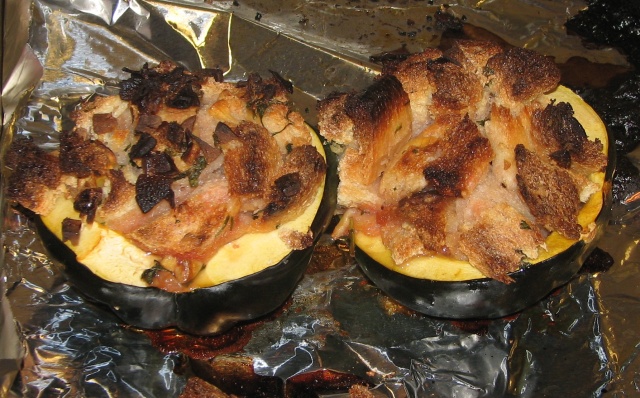 Our second entry to the Fluff Festival cooking competition had the same basic conceit as the Cheese Fluffs: A wacky variation on the rice krispy treat.  However, this recipe had a few bugs in it (not literally!) that weren’t worked out until after the festival.  Maybe we’ll try it again next year and apply our learned experience.

The idea here was to replace the cereal in a rice krispy treat with homemade stove-top stuffing.  To start out, we took some bread (a seriously wholesome and delicious french pullman loaf from Iggy’s bakery) and cut it into bite-sized pieces.  Then we put those pieces in the oven at 200 F for about half an hour to dry them out. 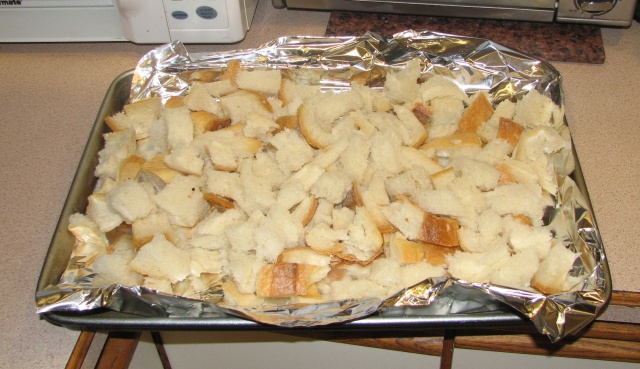 While the bread was drying, we chopped up one smallish onion, several sprigs of parsley, and 5 cloves of garlic.  (The stuffing recipe we were working from called for 2 cloves, but Beth thought, “You can never have too much garlic, right?)  We melted 3 tablespoons of butter in a saucepan over medium-low heat and then sauteed the onions, parsley, and garlic.  We meant to throw in some sage and black pepper, but we forgot.

Once the onion was cooked, we removed the bread from the oven and put it in a mixing bowl to let it cool down a little.  Then we slowly added 1 jar (7.5 oz) of Marshmallow Fluff to the pan, stirring continuously until everything was evenly mixed. 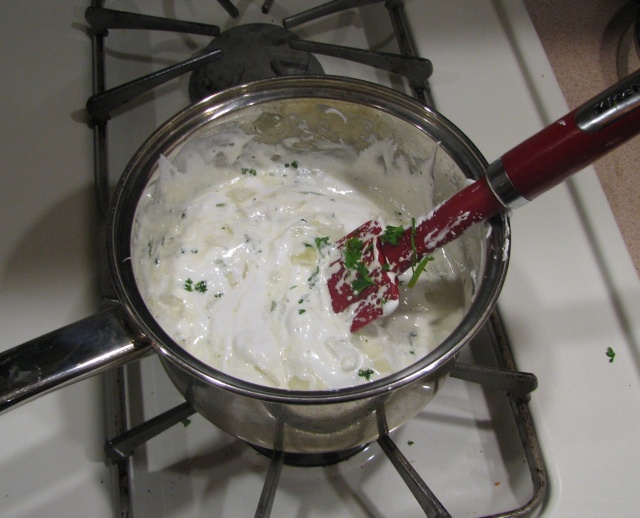 We poured the mixture over the bread chunks little by little, stirring constantly to ensure even coating.  Then we pressed the Fluffing into a parchment lined pan. 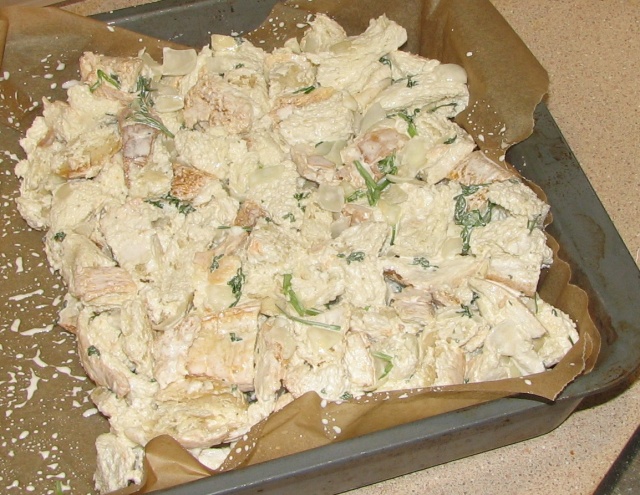 Beth:  They didn’t stick together like I wanted.  I think I need to dry out the bread more and use more marshmallow.  I can’t decide if it’s good or not.  It definitely isn’t bad.  I like the sweet, and I like the savory, but they don’t quite mesh.  I think I used to much garlic.  I’ll keep snacking on it over the next few days.

Alex: Yeah, you used to much garlic.  Edible, but I wouldn’t eat a lot of it.

Kristen: I think the garlic is nice.  Still not my favorite food, though.

It turned out that Beth did not end up snacking on the Fluffing over the next few days.  It was too sugary to be desirable for lunch or dinner, but too garlicky to make a nice sweet snack.  A solution presented itself when Beth wanted to cook up a wholesome dinner of roasted acorn squash and she wanted to stuff the squash with something.  The squash was cut in half, and the strings and seeds were removed.  Each squash-half was filled with a large pat of butter,  as much Fluffing as would fit, and then as much cranberry apple cider as wouldn’t spill out.  Then the squash were stuck in the oven at 400 F for 60 minutes.

Alex: They taste good and they look nice.  Some foil around the edges of the squash might have been good to make it cook more evenly.

Beth: Tasty!  I really like how the marshmallow on the top bread got nicely toasted.  The cranberry cider blended all the flavors together well.  Squash is a place where sweet and savory really work together.  I think this is a great starting point for a tasty contest entry next year.