Here at Unwholesome Foods, we’re not just about desserts, poultry, and poultry desserts!  We like to moisten our palates with unwholesome beverages, too.

Alex likes to make infused vodkas, many of which are even wholesome.  He’s spent years making delicious flavors like strawberry, pineapple, and hazelnut.  Recently he’s been branching away from the sweet and more into the savory with flavors like black pepper, cumin, and horseradish.  They’re pretty good, if you like the flavor in question. A few week ago we were camping, and were pretty limited in mixers.  So Alex decided to try horseradish vodka with whiskey.  We passed a few of these around, and most people agreed that the two went together surprisingly well.  Beth decided she knew the reason for this — she’s always thought that the earthiness of whiskey makes it taste like smoked ham, and horseradish and ham are a natural combination.  (This is why Beth generally avoids whiskey.  Even she does not think ham is a beverage.)

The natural extension of this logic, of course, was to make a drinkable ham sandwich.  But what to use for bread?  We wanted something rich, where you can practically still chew the grain.  The natural choice was Guiness.

Fill a shotglass with half horseradish vodka and half whiskey.

Fill a glass with Guiness.

Drop the shotglass into the beer glass, and chug. 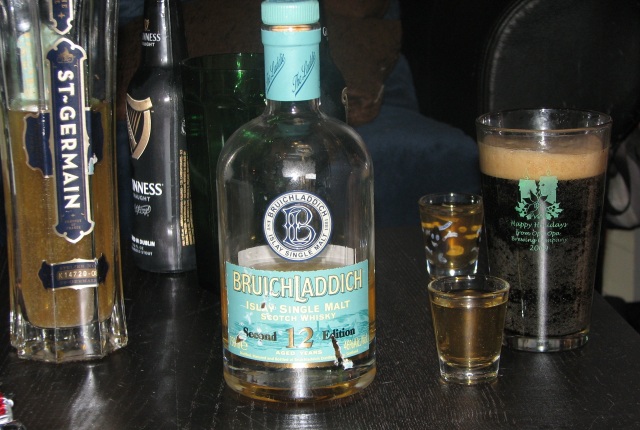 Beth:  It’s like an extra earthy Guiness.  I wouldn’t drink it all the time, but I think I like it.  (Finishes a whole one.)

Di: (Takes a sip)  Good lord.  But yes, that does taste like a ham sandwich.

Kristen:  (Takes a sip) It really does!  And just as I hate ham sandwiches, I hate this.