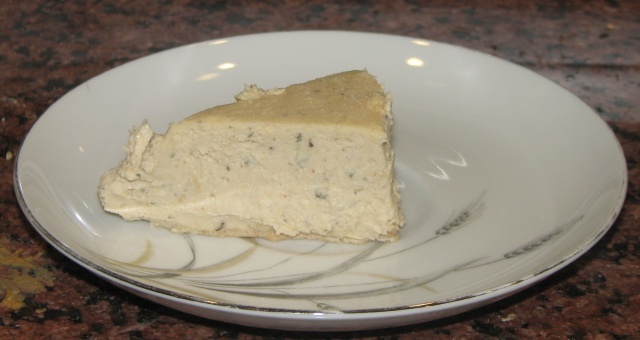 Back at the beginning of April, our household was excited to find that Whole Foods Market had expanded its creativity in food offerings.  Their webpage featured all sorts of exciting new products, and links to great looking recipes.  We were very sad to discover that the recipes did not exist and were only part of an outrageous prank. 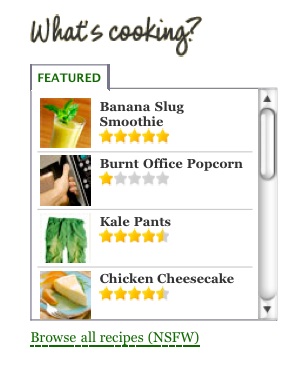 Undaunted, we set out to bring one of these recipes to reality: Chicken Cheesecake.

Beth and Alex disagreed on how to make the chicken cheesecake.  Beth felt that the cake itself needed to contain chicken, and the inspiration for the recipe should come from chicken salad.  Alex favored creating a chicken-based crust for a normal cheesecake, with some chicken-appropriate flavorings.

Beth has never actually made chicken salad, but she figures it must be like tuna salad — get some meat from a can and mix with mayonnaise. 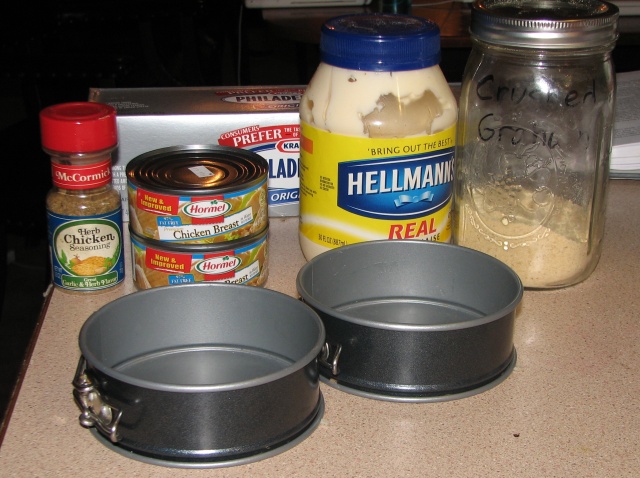 and decided to create a chicken mousse which would be substituted in for the sour cream.  To make the chicken mousse, she combined 2 cans of chicken with 1/3 of a cup of mayonnaise and 1 tablespoon of chicken seasoning.  She then blended the ingredients into a fine paste with Alex’s brand new immersion blender.

She put 2/3 of a pound of cream cheese into the food processor and mixed it until it was somewhat smooth.  Then she mixed in 1/4 cup of brown sugar.  Next she blended in an egg.  Finally, she added the chicken mousse and processed briefly.  She scraped the mixture into some waiting spring-form pans which had been coated with melted butter and dusted with graham cracker crumbs.  Then she wrapped the bottom of the pans in aluminum foil and placed them in the oven onto a pre-heated baking sheet full of water.  She cooked them until the centers were just barely stiff.  Alex’s cheesecake was still cooking in the oven, so Beth moved her cheesecakes to a 200 degree toaster oven to let them cool slowly. 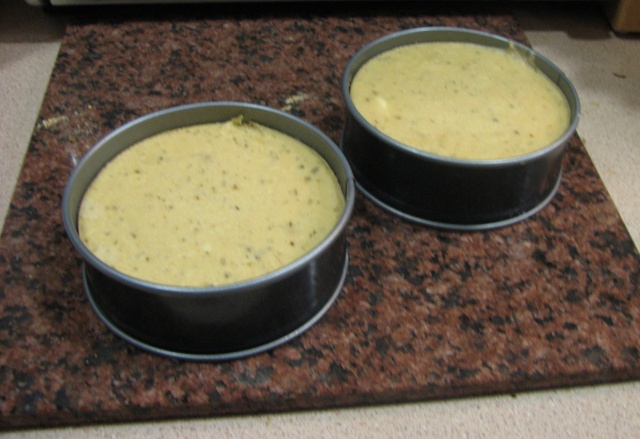 Alex: Good!  So chickeny!  I mean, I wouldn’t eat it voluntarily, but it’s good. Definitely not loathesome.

Beth: No good.  It’s like someone made a sour-cream based dip and just poured a bunch of chicken seasoning into it.

We decided to try it again after it had been in the fridge overnight.

Alex: Weird.  It tastes like some sort of pate or spread.  It should be spread on crackers.  I would consume that.

Beth: Still not right.  Too much seasoning.  Well, I used tuna as my inspiration, so I should eat it like tuna.  On a sandwich with pickles.  *Time passes.*  Okay, that was pretty good as a sandwich.  Maybe I’ll try it grilled.  *Time passes.*  Mmm, okay, that is definitely the right way to eat this thing.  There is still either too much seasoning or too much sugar, but it’s pretty good.  I guess I am bringing a chicken cheesecake sandwich to work for lunch every day this week until it is gone.  I can’t grill it there, but I can toast it. 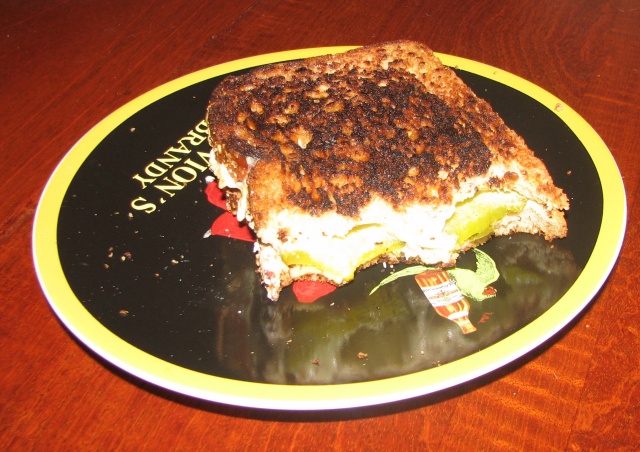