Posted on January 25, 2011 by unwholesomefoods

One might naively assume that beets and broccoli could only be baked in a savory pie, but here we present a dessert pie with a beet filling and broccoli meringue. Unsavory indeed.

You might notice that the meringue is somewhat burnt. We at Unwholesome Foods strive to bring you food that is actually edible, and it’s no fault of the recipe that this pie was burnt. It was all us. We are posting this entry anyway, though, because we found some amusement in what we have been calling the “Star Wars Christmas Special” of our blog.

. Although it was warm in the kitchen and crusts will have a less flaky texture if the heat melts the butter, we did not use vodka instead of water as suggested in Cooks Illustrated because Kristen wanted to nibble on pie dough, and nothing is less appetizing than vodka-infused pie dough. (Note that the alcohol will evaporate during baking so the baked pie crust does not end up tasting like a poorly mixed cocktail.)

Once the dough was placed in the pie dish, we covered it with aluminum foil and weighed it down with rocks (you can use a proper pie weight if you have one). We baked it at 375F for 30 minutes, removed the pie weights and foil and baked for another 10 minutes.

As you can see, Kristen’s nibbling left a somewhat insufficient amount of pie dough. 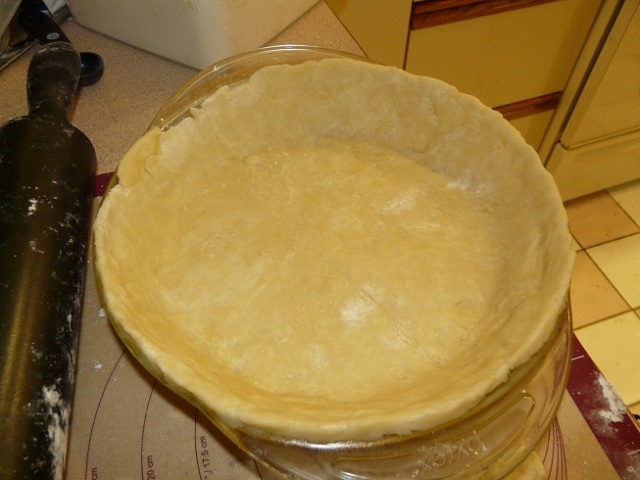 For the filling, we briefly pulsed 2 cans of canned beets in a food processor to pea sized chunks. Then, we brought the beets to a boil with one packet of unflavored gelatin. We refrigerated it until it started to set and then poured it into the pie crust. We then refrigerated until both the filling was fully set and we remembered we were making a pie, which came to four days. (Yeah, this is totally a fail pie. By the time we baked it, it was somewhat dessicated and smelled of the fridge.)

For the meringue, we used the Italian meringue recipe in BakeWise

. Once the meringue was spread onto the chilled pie, we placed uncooked broccoli florets into the meringue. Then, we sprinkled powdered sugar on it.

Look! It snowed in the Broccoli Forest!

Unfortunately, our blow torch was not working, so we attempted to caramelize the sugar by broiling the pie on the second to top shelf of the oven for 90 seconds, which was too long, we are sad to report. Oh no! The broccoli forest is on fire! 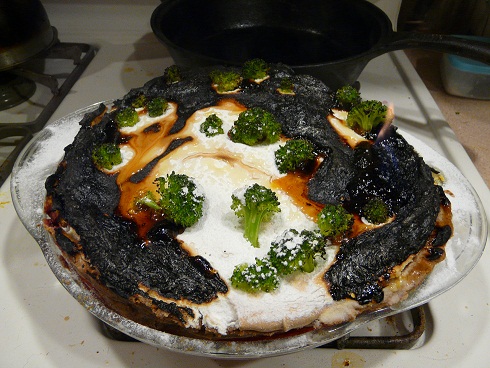 Smokey the Gummy Bear would not be pleased 😦

Alex: The caramelized parts of the meringue were quite good. The freshly caramelized broccoli was delicious but overnight it got foul. The beet filling was mediocre.

Beth: I can’t believe anyone ever thought this thing would be remotely edible.  Beets are unacceptable unless they are fresh and roasted.  This was a sad waste of good meringue and broccoli.  I guess I do have to concede that the fresh caramelized broccoli was interesting, but I’m not sure I’d call it good.

Kristen: The broccoli with caramelized sugar was surprisingly good, if only because I was expecting something unutterably disgusting. The key word is “surprisingly”. Unwholesome, but certainly “surprisingly” tasty.